Computer security's nowadays a very important, yet shockingly underestimated, topic – most likely due to insufficient education of the general public. This can't be stressed enough when it comes to smartphones and IoT devices. Such devices varies from PCs in one major detail – we carry them around with us all day long. They handle most of our communication, contain various sensors and microphones,… An infected device can among other things spy on conversations, track location of its user, photograph and record them, their family and household. Possibilities of misuse are nearly infinite.

Android's the dominant mobile OS (>88% share) developed by Google, Inc. Due to its major share, Android enjoys a lot of attention from hackers.

Android has a robust security model which treats all apps as implicitly untrusted, its main security issue being the diversity of devices running Android, of which only a minority gets periodical security updates and/or runs on newest OS version.

Android has a robust multilayer security model. It uses the Linux kernel, implements a MAC and mitigations against memory corruption exploits – Android's the only linux distribution not supporting running non-PIE code. Each app's assigned their unique user ID and runs in sandbox, thus can't intervene with other apps and only is allowed to operate with files/OS components for which the user gives their permission.

Android's built on the Linux kernel. Linux kernel arguably might not be the best choice from security perspective, but offers a decent permission model based on users and user groups, process isolation etc.

Android Kitkat and above uses a significantly modified Linux MAC implementation – SEAndroid. SEAndroid considerably reduces the attack surface and also plays an important role in Android's permission model. Thanks to the MAC implementation, only a tiny portion of code now runs with full root permissions. Major enhancements regarding MAC have been introduced in Lollipop and Oreo releases.

Android requires all apps to be digitally signed – unsigned apps won't run. By default, apps can only be installed from a preinstalled app store – typically Google Play. Each app's confined in its own sandbox (IsolatedProcess), effectively being isolated from other apps and the OS. Android implements seccomp sandbox, providing advanced means isolation and higher degree of security. Seccomp sandbox's internally used e.g. by Google Chrome browser.

Android Marshmallow and above implements an app permission model – user chooses to which files/components apps gain access. Several enhancements've been introduced with every OS release, the last being Q right now. Using third-party permission managers (such as XPrivacy) is strongly discouraged.

FAQ is divided into several sections:

As mentioned above, variety and diversity of devices running Android OS is a major security issue. Only a few manufacturers provide periodical security patches and OS updates for their models, for different reasons. As a result, brand new devices with old OS version and many known vulnerabilities – significantly raising the risk of exploitation – can be found on the market. Such practise unfortunately isn't only limited to cheap models, but more expensive ones as well. Users are therefore encouraged to consider security parametres when picking their device. Below you'll find several parametres a device should offer in order to be considered for selection.

Info
There're two levels of monthly security patches – 1st day of month and 5th day of month. Both levels are relevant for most devices on the market. If a manufacturer provides frequent updates for their device, but only implements the first patch level (e.g. 1 November 2019), this may pose an issue.

Each new OS release introduces significant security and other enhancements. For example, Marshmallow introduced app permission model, empowering users to choose what each app can access. Nougat introduced a rewritten MediaServer, effectively incapacitating several families of exploits such as Stagefright. Oreo elevated sandboxing to a whole new level by introducing Project Treble and flat use of seccomp for apps. Above that enhanced WebView and app permission model. The list goes on for every release. It can be said with a clear conscience that no Android OS release prior to Pie is secure and shouldn't be used.

Let's look at one example. You install a malicious app on older 8.1 Android – you've got control over app's permissions and can disable shady permissions. However, you don't have the newest security patches. The app can therefore exploit the OS using a known vulnerability – and user won't notice a thing, ever. Such practise's daily bread for Android malware as it's the simplest and cheapest way of device infection – more than 90 % of the devices hasn't got critical security patches.

Tip
You can also find inspiration in the list of recommended devices for enterprises od Google.

Android's typically safely configured by default, but it never hurts to check your configuration.

Permissions manager empowers user to configure what information and components can each application access.

Guest account provides a relatively safe means of e.g. browsing the web. Installing shady apps is discouraged even from the Guest account as apps' arsenal for exploiting the OS is considerably larger than a website's. Not even factory reset would help in such scenario.

As the source of installed apps, an application store should be considered a crucial security component.

Stores like Amazon or Samsung don't always have the latest app releases, especially of the frequently updated apps. Namely Amazon has an extremely long process of checking applications (done manually).

Firewall's an essential OS security layer providing protection against network attacks. Its use on public WiFi connections is a must.

Integrated FW makes for the best option, unfortunately few ROMs offer any enhancements to the basic firewall. Abusing VPN API (NetGuard, NoRoot Data Firewall,…) may not be the nicest and most reliable option, but at least doesn't require destroying the OS's security model and works quite well.

Ad blocking's become a necessity beacuse of the web's amount of malicious ads. Supporting your favourite websites should be carrited out in a different and more secure way – donations, subscribtions,…

Chrome/Chromium's a browser with superior exploit mitigations. Browsers based on Mozilla Firefox are still lagging behind Chrome, especially on Android OS.

Info
Now JS is by default disabled for all websites. Should you want to allow JS for a specific website, all you have to do is tap the browser icon in upper panel and allow scripts. 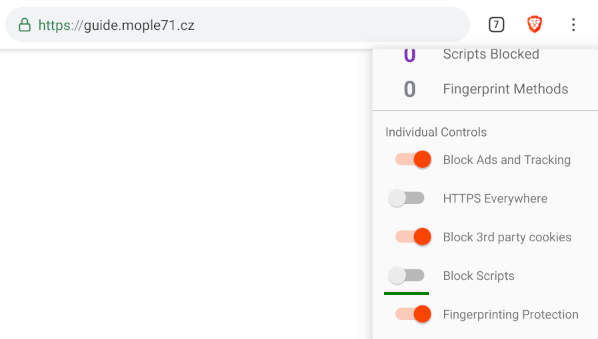